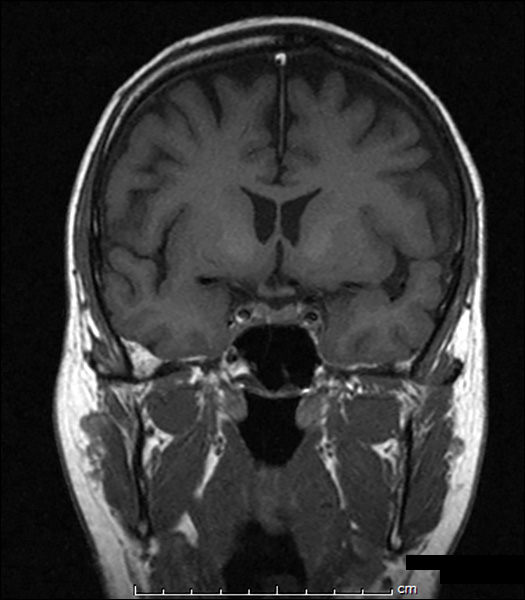 What is the most likely explanation of his symptoms?

A 54-year-old woman attended clinic for routine follow-up. She had Cushings syndrome secondary to ectopic adrenocorticotropic hormone syndrome with no primary source identified.
She had declined bilateral adrenalectomy. Routine medication included metyrapone 500 mg three times daily, ketoconazole 200 mg once daily and hydrocortisone 10 mg in the morning and 5 mg in the evening.
Metyrapone inhibits the action of which enzyme in steroidogenesis?

A 57-year-old man was admitted to hospital with joint pains. He was found to have gout. He had been found to have type 2 diabetes mellitus at the age of 47 years and developed nephropathy 7 years later. He was taking metformin 1 g twice daily, ramipril 5 mg twice daily and gliclazide 80 mg twice daily. The admitting team advised him to take ibuprofen
400 mg three times daily as needed.
On examination, his pulse was 87 beats per minute and his blood pressure was 146/85 mmHg. He had an inflamed right hallux.
Investigations:
serum sodium131 mmol/L (137144)
serum potassium5.1 mmol/L (3.54.9)
serum creatinine156 mol/L (60110)
estimated glomerular filtration rate (MDRD)42 mL/min/1.73 m2 (>60) haemoglobin A1c72 mmol/mol (2042) random plasma glucose23.0 mmol/L
What is the most appropriate step in management?

A 23-year-old woman presented to the outpatient clinic complaining of an inability to lose weight and irregular menses. Her food diary suggested that she consumed only 900 kilocalories daily. She had previously been found to have hypothyroidism and was treated with levothyroxine 75 micrograms daily.
On examination, her body mass index was 40.2 kg/m2 (1825).
Investigations:
serum testosterone3.6 nmol/L (0.53.0)
plasma follicle-stimulating hormone3.0 U/L (2.510.0)
plasma luteinising hormone9.0 U/L (2.510.0)
serum thyroid-stimulating hormone4.6 mU/L (0.45.0)
serum free T412.8 pmol/L (10.022.0)
What is the most appropriate next step?

A 49-year-old woman presented with a mass in her neck that was causing no specific symptoms.
Examination revealed a solitary nodule in the right thyroid lobe, with no associated lymphadenopathy. Thyroid function was normal. No other abnormality was noted. There was no evidence of lymphadenopathy in the neck.
Investigations:
ultrasound scan of necksolid hypoechoic nodule 1.8 ? 1.2 ? 1 cm in right thyroid lobe; cyst 0.6 ? 0.3 ? 0.2 cm in left thyroid lobe cytology (fine-needle aspirationscanty colloid with abundant from nodule in right lobe)thyroid follicular cells (Thy3f)
What is the most appropriate next step in management?

A 48-year-old man presented with an infected ulcer, measuring 2 ? 1 cm, over the right first metatarsal head, with surrounding cellulitis. He had no previous history of diabetes mellitus but had been told by his general practitioner some years previously that his blood glucose was borderline.
On examination, his temperature was 37.4C, his blood pressure was 158/92 mmHg and his body mass index was 31.5 kg/m2 (1825). His foot pulses were easily palpable but he had a sensory neuropathy.
Investigations:
random plasma glucose16.4 mmol/L
haemoglobin A1c81 mmol/mol (2042)
What is the most appropriate treatment for his hyperglycaemia?

A 72-year-old man with a dense residual hemiparesis and unsafe swallow was fed via a percutaneous gastrostomy for 20 hours each day. He resided in a nursing home and had type 2 diabetes mellitus that had been well controlled on metformin.
His glucose concentrations were uncontrolled on metformin powder at maximum dose.
While not being fed, his blood glucose was measured.
Investigations:
capillary blood glucose3.1 mmol/L
According to the Joint British Diabetes Societies Guidelines (2012), what is the most appropriate management?

A 33-year-old woman was seen for diabetes review 2 months after her first pregnancy.
Diabetes mellitus had been diagnosed at 18 weeks gestation. She had experienced no symptoms; routine urinalysis had shown glucose 4+, with no ketones, and her fasting blood glucose concentration was 6.2 mmol/L (3.06.0), rising to 13.5 mmol/L (<7.8) in a 75-g oral glucose tolerance test. She had been treated with insulin during the pregnancy, and stopped after delivery. Her mother and maternal aunt had been treated for type 2 diabetes mellitus, and a maternal uncle for type 1 diabetes. Her body mass index was 23.7 kg/m2
(1825).
Without insulin she remained well, with no osmotic symptoms, no weight loss and no ketosis.
Investigations:
fasting plasma glucose8.4 mmol/L (3.06.0)
haemoglobin A1c68 mmol/mol (2042)
oral glucose tolerance test (75 g):
fasting plasma glucose7.9 mmol/L (3.06.0)
2-h plasma glucose13.8 mmol/L (<7.8)
serum insulin72 pmol/L (<186)
serum C-peptide945 pmol/L (180360)
A trial of therapy with gliclazide 40 mg once daily led to a significant improvement in her blood glucose.
What is the most likely cause of her diabetes?

A pregnant 36-year-old woman presented to the diabetes outpatient clinic. She had type 2 diabetes mellitus treated with diet, lifestyle changes and metformin 500 mg twice daily.
On examination, her blood pressure was 128/84 mmHg.
Investigations:
haemoglobin A1c47 mmol/mol (2042)
urinary albumin:creatinine ratio1.6 mg/mmol (<3.5)
Which is the best agent to reduce the risk of pre-eclampsia in this patient?

A 72-year-old man with a dense residual hemiparesis and unsafe swallow was fed via a percutaneous gastrostomy for 20 hours each day. He had type 2 diabetes mellitus that had been well controlled with metformin.
His glucose levels were uncontrolled on metformin powder at maximum dose.
According to the Joint British Diabetes Societies Guidelines (2012), what is the most appropriate next hypoglycaemic agent?

A 33-year-old man was referred to the diabetes clinic with an 8-month history of weight loss and polydipsia. Two months previously his general practitioner had found a high fasting plasma glucose concentration of 17.5 mmol/L (3.06.0) and a haemoglobin A1c of 116 mmol/mol (2042). The patient was taking metformin 1 g twice daily. He reported in the diabetes clinic that his home capillary blood glucose concentrations persisted to be high, ranging between 1524 mmol/L.
On examination, his body mass index was 23 kg/m2 (1825).
His blood tests were repeated in the diabetes clinic and he was treated with a basal bolus insulin regimen. Urinalysis was negative for ketones.
Investigations (in diabetes clinic):
haemoglobin A1c110 mmol/mol (2042)
serum C-peptide200 pmol/L (180360)
anti-glutamic acid decarboxylase (GAD)
antibodies69 IU/mL (<10)
anti-IA2 antibodiesnegative
What is the most likely diagnosis?

A 48-year-old man was referred by his general practitioner, whose letter stated: Please review this mans blood pressure management, as he has requested a second opinion, having seen information on the internet about the need for more detailed investigation. He has been having treatment for 10 years.
At the consultation, the patient confirmed that he was currently taking bendroflumethiazide
2.5 mg daily, atenolol 50 mg daily and perindopril 8 mg daily. His clinic blood pressure was
169/108 mmHg. Clinical examination was otherwise normal.
Investigations:
serum sodium142 mmol/L (137144)
serum potassium3.9 mmol/L (3.54.9)
estimated glomerular filtration rate (MDRD)>60 mL/min/1.73 m2 (>60) ambulant plasma renin activity0.5 pmol/mL/h (3.04.3) ambulant plasma aldosterone380 pmol/L (330830)
What is the most appropriate next step in management?

A 24-year-old man was referred for investigation of infertility. He had been having unprotected intercourse with his partner for 18 months, but the couple had failed to conceive. He had been treated for Hodgkins lymphoma at the age of 17.
What is the most appropriate investigation?