Note: This question is part of a series of questions that use the same set of answer choices. Each answer choice may be used once, more than once, or not at all.
You have a computer named Computer1 that has a dual-boot configuration. Computer1 has Windows 8.1 and Windows 10 installed.
You need to configure Computer1 to use only 4 GB of RAM when the computer starts in Windows 10.
What should you run?

You install all of the Contoso apps on Computer7.
You need to meet the requirements of Computer7.
What should you do?

Which hardware feature must Computer4 support?

You need to meet the requirement of Computer6.
What should you configure?

You need to meet the requirement of User1.
Which Ease of Access setting should you configure?

HOTSPOT -
You have a computer named Computer1 that runs Windows 10.
You run the Get-VMHost | fl* cmdlet on Computer1, and you receive the following output: Use the drop-down menus to select the answer choice that completes each statement based on the information presented in the output.
Each correct selection is worth one point.
Hot Area:

HOTSPOT -
Your network contains a single Active Directory domain named contoso.com.
In contoso.com, you create an organizational unit (OU) named OU1.
You need to use a provisioning package to perform the following:
-> Configure the computer names as "Station", followed by a random three-digit number.
-> Join the computers to contoso.com, and then create an account for the computers in OU1.
How should you configure the provisioning package? To answer, select the appropriate options in the answer area.
Hot Area:

You have a computer named Computer1.
You obtain a new driver for a device installed on Computer1. The driver package is stored in C:\Drivers and includes the following files:
-> Driver.inf
-> Driver.dll
-> Driver.sys
-> Driver.cat
You need to install the driver on Computer1 by using File Explorer.
Which file should you use to initiate the installation?

Explanation:
Right-click on the .inf file and select Install.

You have four computers configured as shown in the following table:

You need to deploy Windows 10 Enterprise. The deployment must support Miracast, BitLocker Drive Encryption (BitLocker), and Windows Hello with facial recognition.
On which computer should you install Windows 10?

Your network contains a single Active Directory domain that has a Key Management Service (KMS) host.
You deploy Windows 10 to several laptops.
You need to ensure that Windows 10 is activated on the laptops immediately.
Which command should you run?

Your network contains a single Active Directory domain. The domain contains two computers named Computer1 and Computer2.
From Computer1, you need to view the installed devices and their associated drivers on Computer2.
What should you use?

You need to create a script to verify the activation status on 100 computers.
What should you use in the script?

You install Windows 10 on a computer named Computer1. Computer1 is a member of a workgroup and will be used by multiple users to browse the Internet.
You need to ensure that a file named Policy1.docx appears on the desktop of Computer1 for all users who use the computer. The solution must minimize the number of copies of Policy1.docx.
What should you do?

HOTSPOT -
You configure a Group Policy on a computer that runs Windows 10 Enterprise as shown in the following graphic: 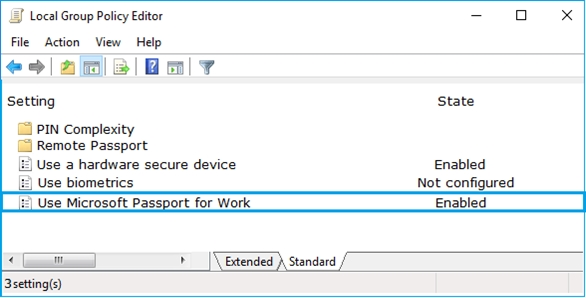 Use the drop-down menus to select the answer choice that completes each statement based on the information presented in the graphic.
Hot Area:

You have a computer that runs the 32-bit version of Windows 7 Professional with Service Pack 1.
You need to perform an in-place upgrade to Windows 10.
Which two editions of Windows 10 can you upgrade the computer to? Each correct answer presents a complete solution.