You are evaluating a disaster recovery solution for the planned Front End pools.
You need to recommend a solution for restoring access to the Central Management store if the Front End pool fails.
Which cmdlet should you include in the recommendation?

General Overview -
Litware, Inc. is an international manufacturing company that has 10,000 users.

Physical Locations -
Litware has two offices. The offices are located in New York and Denver.
The offices connect to each other by using a WAN link. Each office connects directly to the
Internet.

All of the servers that have Lync Server 2010 deployed are monitored by using Microsoft
System Center Operations Manager.
All client computers have either Microsoft Lync 2010 or Microsoft Office Communicator
2007 R2 installed.
Administrators configure the following Lync Server 2010 features:
-> IM and presence for all sites
-> External user access for IM and conferencing
-> Conferencing for all sites
-> Response groups
-> Group Chat

Problem Statements -
Litware identifies the following issues:
-> Users report that other users who are not listed on their contact list can see their presence information. This also occurs when the users set their privacy mode to allow only the users on their contact list to see their presence information.
-> The users report that when they connect to meetings remotely, they cannot use presenter controls.

Planned Changes -
Litware plans to upgrade to Lync Server 2013 during the next six months and plans to implement the following changes during the upgrade:
-> Migrate the current Front End pool to an Enterprise Edition Front End pool named fepooll that will contain two servers named Lyncl3_01 and Lyncl3_02.
-> Migrate Group Chat to Persistent Chat.

You need to recommend which names must be included in the certificate installed on
Lyncl3_02.
Which names should you recommend? (To answer, select the appropriate names in the answer area.) 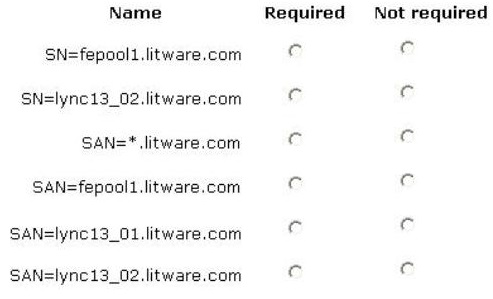 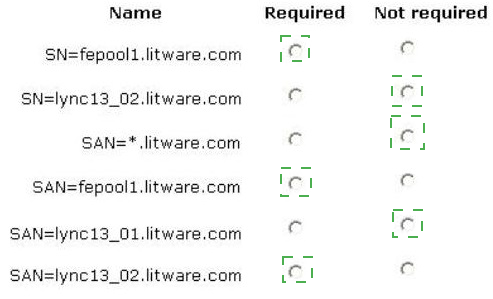 Explanation:
http://technet.microsoft.com/en-us/library/gg398094.aspx
Certificate MUST have the Pool Name as the Subject Name (SN) and SAN Name and the
Server Name in the SAN. 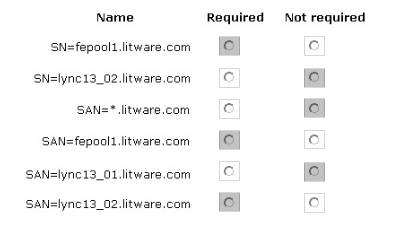 You install System Center 2012 Operations Manager on a server named SCOM01. You import the Lync 2013 Server Management Pack to SCOM01.
You need to configure monitoring to meet the technical requirements.
Which three actions should you perform before you configure the synthetic transactions?
(Each correct answer presents part of the solution. Choose three.)

Explanation: * From Scenario:
A client computer named Monitor01 must be used to monitor client connectivity by using synthetic transactions.
* You must run Watchernode.msi on a computer where both the Operations Manager
(SCOM) agent files and the Lync Server 2013 core components are installed.
Note:
* Watcher nodes are computers that periodically run Lync Server synthetic transactions.
Synthetic transactions are Windows PowerShell cmdlets that verify that key end user scenariossuch as the ability to sign in to the system, or the ability to exchange instant messagesare working as expected.
Reference: Installing and Configuring Watcher Nodes

You need to recommend which type of client connection the remote users must use to prevent the connection issue.
Which Lync client or clients should you recommend? (Choose all that apply.)

Explanation: A: Lync 2013 is the full-featured client for Lync Server. The Lync 2013 user interface has been fully redesigned and includes newly integrated features, such as
Persistent Chat (Lync 2010 had a separate client for chat functionality), tabbed conversations, video preview, and multiparty video
B:
* Lync Web App is the client of choice for participants outside your organization. With Lync
Web App, no local client installation is required, although audio, video, and sharing features require installation of a plug-in during first use.
* Lync Web App is the web-based conferencing client for Lync Server 2013 meetings. In this release, the addition of computer audio and video to Lync Web App provides a complete in-meeting experience for anyone who does not have a Lync client installed locally. Meeting participants have access to all collaboration and sharing features and presenter meeting controls.
Note:
* From scenario:
/ Migrate Group Chat to Persistent Chat
/ Users running previous client versions must be able to use chat features after the server is migrated to Persistent Chat.
Incorrect:
Not C:
* Lync Windows Store app supports most of the commonly-used features for contact management, conversations, and calls. For advanced features such as delegate set up, team calls, response groups, and persistent chat, use Lync 2013 for the desktop instead.
Not D:
* Because of the enhancements to Lync Web App, an updated version of Microsoft Lync
2010 Attendee is not available for Lync Server 2013.
* Lync 2010 Attendant The Microsoft Lync 2010 Attendant integrated call-management program enables a receptionist to manage multiple conversations at the same time through rapid call handling, IM, and onscreen routing.
Reference: Clients for Lync Server 2013

You need to recommend the minimum number of Lync servers required to support the Lync
Server 2013 infrastructure in the New York office. The solution must meet the high availability requirements.
How many servers should you recommend deploying to each network? (To answer, select the appropriate number of servers for each network in the answer area.)

You need to recommend which actions must be performed to add the planned Lync Server
2013 servers.
Which three actions should you recommend in sequence? (To answer, move the appropriate three actions from the list of actions to the answer area and arrange them in the correct order.) 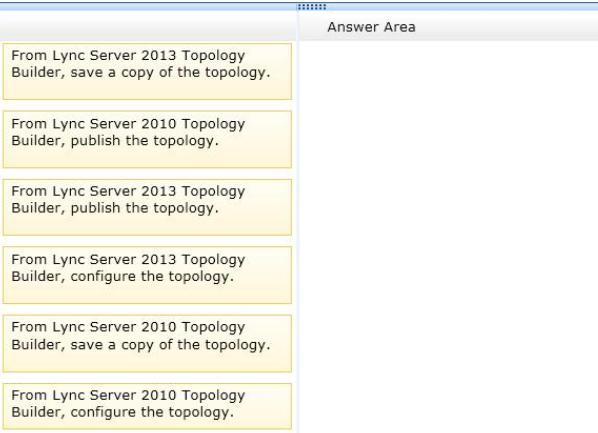 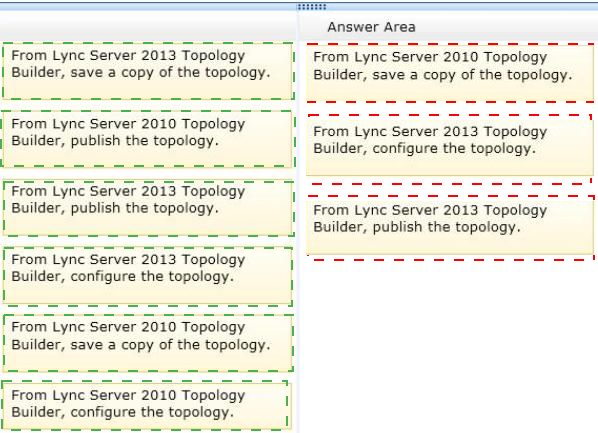 You need to ensure that the Client Computers that have Office Communicator 2007 R2 installed can use IM and Presence and can join Web Conferences Hosted on Lync Server
2013.
The solution must minimize Administrative effort.
What should you do?

Explanation:
The presence and IM features in Office Communicator 2007 R2 are compatible with Lync
Server 2013, but conferencing features are not. During migration from Office
Communications Server 2007 R2, Office Communicator 2007 R2 is suitable for presence and IM interoperability, but users should use Lync Web App 2013 to join Lync Server 2013 meetings.
Ref: http://technet.microsoft.com/en-us/library/jj204672.aspx

After the migration, users report that when they connect remotely, they fail to sign in by using the Lync 2013 Windows Store app.
You verify the external DNS records for Lync and locate the records shown in the following table.

You need to ensure that the users can sign in by using the Lync 2013 Windows Store app.
What DNS record should you create? (To answer, select the appropriate configuration in the answer area.) 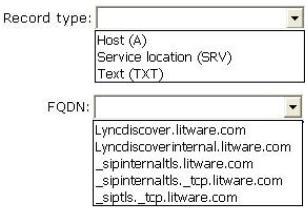 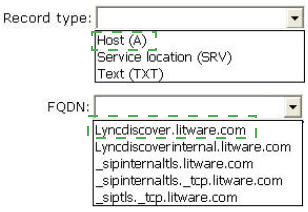 You need to recommend a solution to resolve the presence information issue.
You verify that enhanced presence privacy mode is enabled for all users.
What should you recommend including in the solution?

You need to move all users to the new Lync Server 2013 infrastructure.
What command should you run? (To answer, configure the appropriate command in the answer area.)

You need to implement a solution to meet the notification requirements for the mobile devices. The solution must meet the technical requirements.
Which three actions should you perform before you enable push notification? (Each correct answer presents part of the solution. Choose three.)

Physical Locations -
Contoso has two main offices. The offices are located in Houston and Frankfurt. Each office has 15,000 users.
The offices connect to each other by using an MPLS network. Each office connects directly to the Internet.

Problem Statements -
The users in the pilot report that occasionally, they cannot sign in to Lync 2013.

Business Goals -
Contoso plans to upgrade to Lync Server 2013 during the next six months. Contoso must deploy all of the Lync Server conferencing and edge services. Contoso must also configure federation with its parent company, which is named Proseware, Inc. Proseware is located in Europe and has an Office Communication Server 2007 R2 infrastructure.
Contoso must minimize hardware and software purchasing costs, while guaranteeing performance levels for all Lync Server 2013 workloads.

Planned Changes -
Contoso plans to implement the following workloads in the Lync Server 2013 deployment:
-> Federation
-> Dial-in conferencing
-> External user access
-> Audio, video, and web conferencing
-> The ability to host Lync meetings that have external participants
The FQDNs of the edge services will be configured as shown in the following table.

Technical Requirements -
Contoso identifies the following technical requirements for the planned deployment:
-> Only federation to Proseware must be allowed.
-> All of the edge services must use default ports.
-> WAN traffic and Internet traffic must be minimized.
-> All of the user contacts stored in Lync Server 2013 must be backed up.
-> The sales department must have a dedicated dial-in conferencing number. All other users in both the United States and Europe must use a

You need to recommend an archiving solution that meets the business goals and the technical requirements.
Which two actions should you recommend? (Each correct answer presents part of the solution. Choose two.)

You need to recommend a backup solution to meet the technical requirements. Which tool should you include in the recommendation?