You need to configure the Exchange Server UM dial plan for the planned integration of UM and Lync Server.
How should you configure the UM dial plan? (To answer, select the appropriate dial plan type and VoIP security mode in the answer area.) 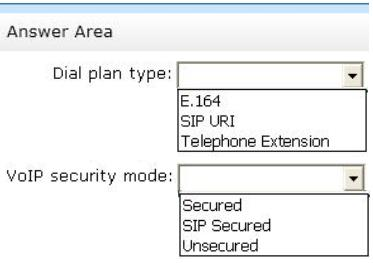 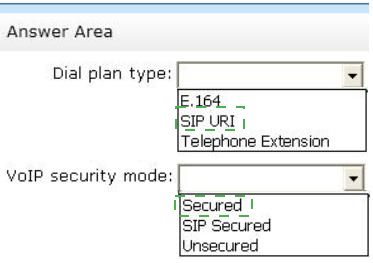 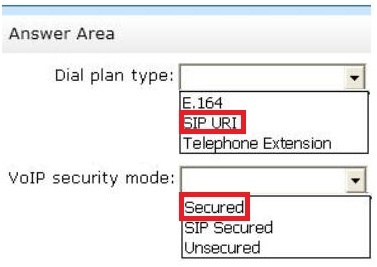 * Scenario: Integrate Unified Messaging (UM) services with the Lync Server 2013 infrastructure.
* If you want to integrate Exchange Unified Messaging (UM) with Lync Server 2013, you must perform the following tasks:
/ On the Exchange UM server, create a SIP dial plan based on your organizations specific deployment requirements.
/ To encrypt Enterprise Voice traffic, configure the security settings on the Exchange UM
SIP dial plan as SIP Secured or Secured.
Etc.
Note:
* There are three formats or URI types that can be configured on UM dial plans:
/ Telephone Extension (TeleExtn)
/ SIP URI
Session Initiation Protocol (SIP) is a standard protocol for initiating interactive user sessions that involve multimedia elements such as video, voice, chat, and gaming. SIP is a request-to-response based protocol that answers requests from clients and responses from servers.
/ E.164
* When you configure the dial plan to use SIP secured mode, only the SIP signaling traffic will be encrypted, and the RTP media channels will still use TCP, which isnt encrypted.
However, when you configure the dial plan to use Secured mode, both the SIP signaling traffic and the RTP media channels are encrypted. An encrypted signaling media channel that uses Secure Realtime Transport Protocol (SRTP) also uses mutual TLS to encrypt the
VoIP data.

You are attempting to resolve the email delivery issue for Fabrikam.
You need to identify which certificate is being used by the servers in the Exchange Server organization of Fabrikam.
In which directory on EX1 should you review the log files? (To answer, select the appropriate directory in the answer area.) 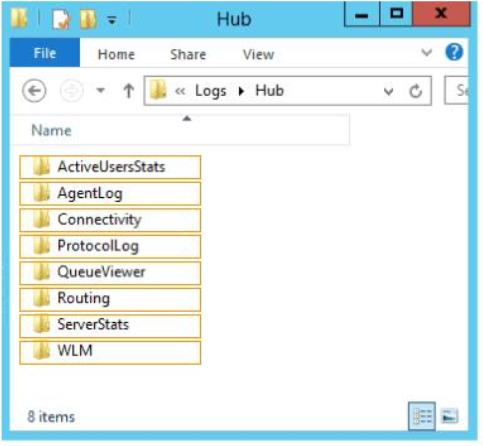 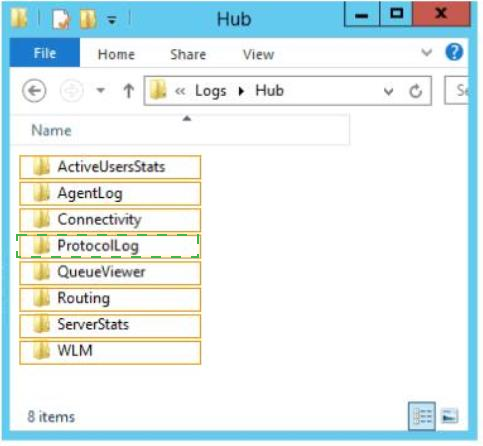 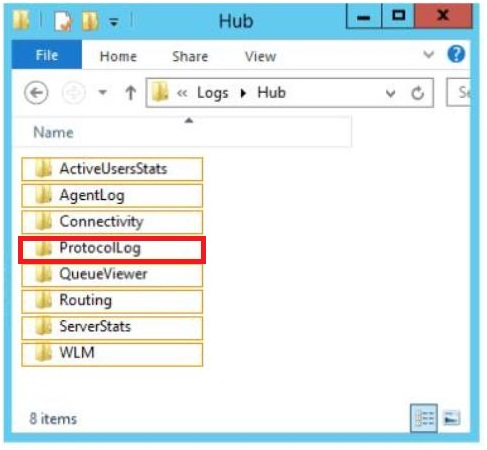 You need to recommend a solution that meets the compliance requirements for email messages that contain information about the Fabrikam acquisition.
Which three actions should you recommend? (Each correct answer presents part of the solution. Choose three.) 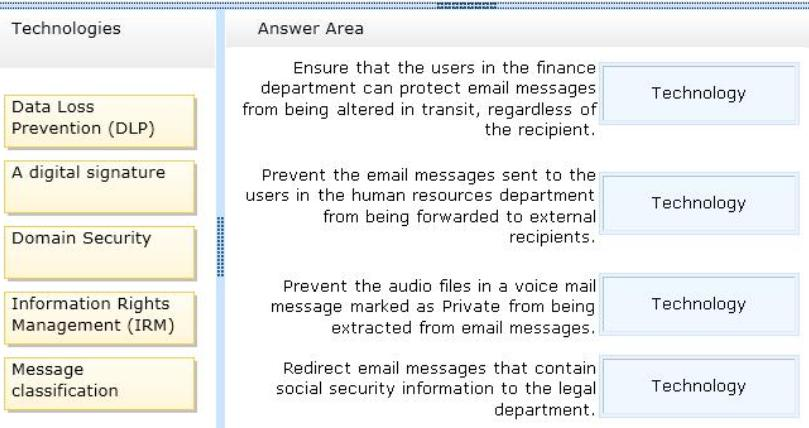 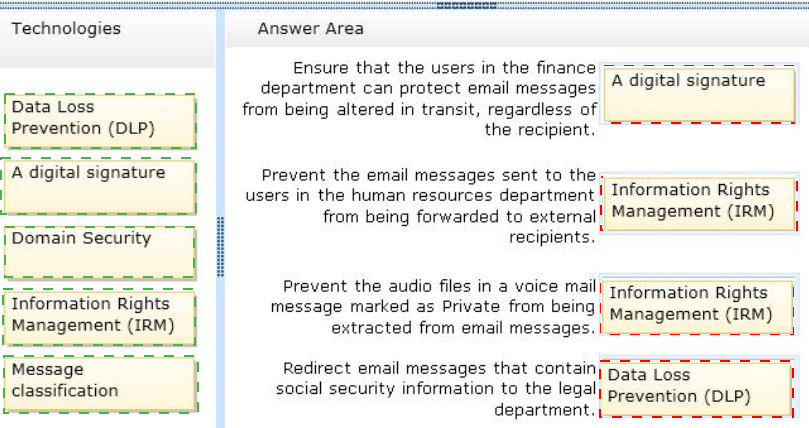 You need to implement a solution that meets the collaboration requirements.
What should you do?

Explanation:
* Scenario: Custom recipient MailTips created in the Exchange Server organization of Trey
Research must be visible to the users at Fabrikam. The solution must ensure that administrators can define a subset of users who can share their MailTips.
* MailTips Over Organization Relationships
You may want to restrict certain types of MailTips. You can either allow all MailTips to be returned or allow only a limited set that would prevent NDRs. You can configure this setting parameter on the Set-OrganizationRelationship cmdlet.
Reference: MailTips over organization relationships

You restore the files of DB3 to EX3.
You need to mount DB3 on EX3. The solution must ensure that email messages sent to the users of DB3 while the database was offline are delivered once DB3 is mounted.
Which three actions should you perform in sequence? (To answer, move the appropriate three actions from the list of actions to the answer area and arrange them in the correct order.) 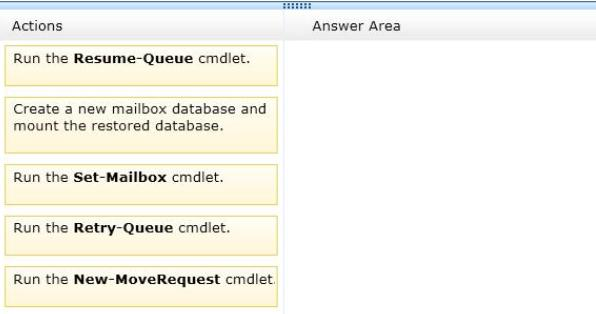 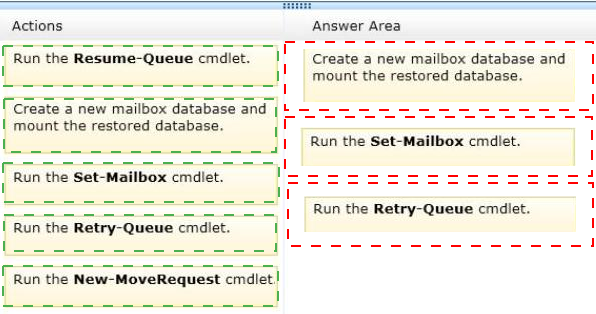 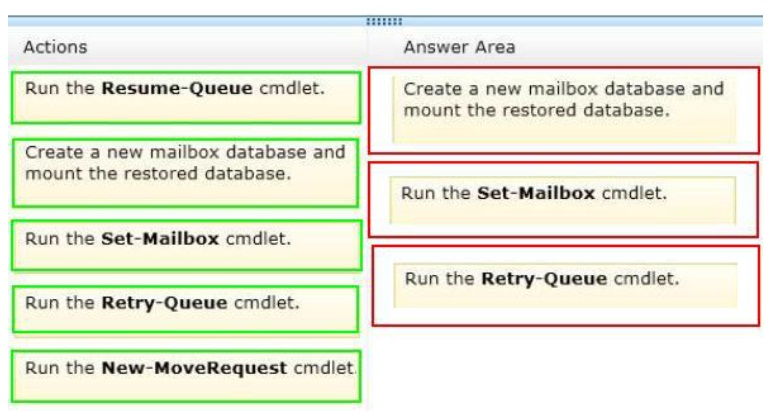 You need to implement a solution that meets the compliance requirements for the members of the legal department.
Which two cmdlets should you use? (Each correct answer presents part of the solution.
Choose two.)

Physical Locations -
Proseware has two main offices located in New York and London.
The offices connect to each other by using a WAN link. Each office connects directly to the
Internet. Contoso has a single office in Dallas.

EX3 and EX4 are the members of a database availability group (DAG) named DAG1.
DAG1 has two DAG networks. The networks are configured as shown in the following table.

Users connect to mail.proseware.com for Microsoft Outlook and Outlook Web App services. Mail.proseware.com resolves to an IP address on a hardware load balancer.
All Outlook Anywhere users are enabled for Cached Exchange Mode.
Proseware pilots a hybrid deployment of Exchange Server 2013 and Microsoft Office 365.
The mailbox of each pilot user is moved to Office 365. For the pilot mailboxes, all inbound email messages from the Internet are delivered to the Exchange Server organization, and then forwarded to Office 365.
Contoso has an Exchange Server 2010 organization.

Problem Statements -
Proseware identifies the following issues:
-> MapiNet is saturated with network traffic caused by the database replication between the members of DAG1 over MapiNet.
-> The pilot users report that entries added to their Safe Senders list and their
Blocked Senders list fail to work.
-> A recent power outage in the New York office prevents all users from accessing their mailbox.
-> A user named User1 rep

You are evaluating the deployment of two additional Client Access servers and a hardware load balancer in the London office.
You need to recommend changes to the Client Access namespace design to meet the site resiliency requirements.
Which three actions should you recommend? (Each correct answer presents part of the solution. Choose three.)

Site Resiliency Requirements -
- All mailboxes must be available if a single site becomes unavailable. The solution must not require administrator intervention.
- User traffic on the WAN links must be minimized.
* Split DNS for Exchange Server 2013
Split DNS allows your internal clients to receive a different answer to their DNS lookups than an external client would receive. In effect you have your Exchange namespace hosted on your internal DNS server, with records configured to point to internal IP addresses.

You need to recommend a solution to audit the issue of User1.
Which command should you recommend? (To answer, select the appropriate options in the answer area.)

* Scenario: A user named User1 reports that email messages are being sent from her mailbox without her consent.
* Set-Mailbox AuditDelegate
The AuditDelegate parameter specifies the operations to log for delegate users.

You need to recommend a solution to meet the technical requirements for redundancy during email delivery.
Which cmdlet should you include in the recommendation?

Explanation:
/ Internal email messages must be rejected if the messages cannot be protected by using

Shadow Redundancy -
We need to use the Set-TransportConfig cmdlet with the RejectMessageOnShadowFailure parameter.

You need to resolve the network traffic issue for MapiNet.
You suspend database replication.
Which three cmdlets should you run next in sequence? (To answer, move the appropriate three cmdlets from the list of actions to the answer area and arrange them in the correct order.) 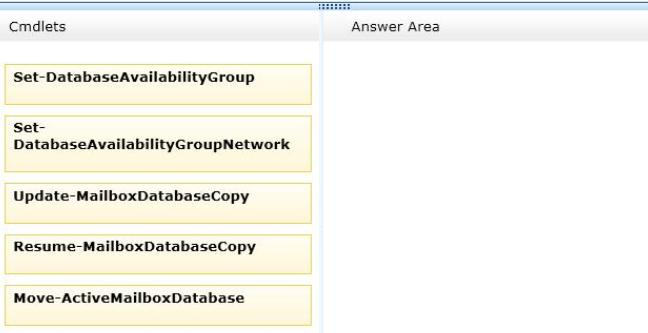 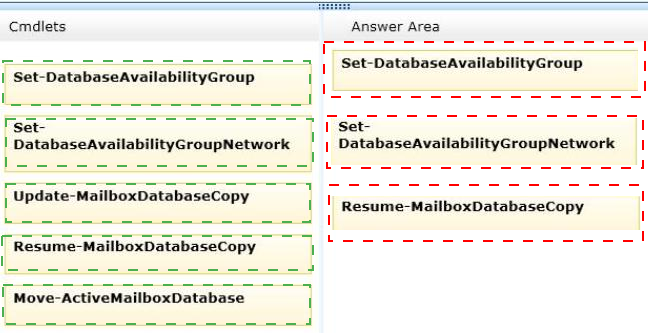 You need to implement UM for the sales department users.
Which four commands should you run in sequence? (To answer, move the appropriate four commands from the list of commands to the answer area and arrange them in the correct order.) 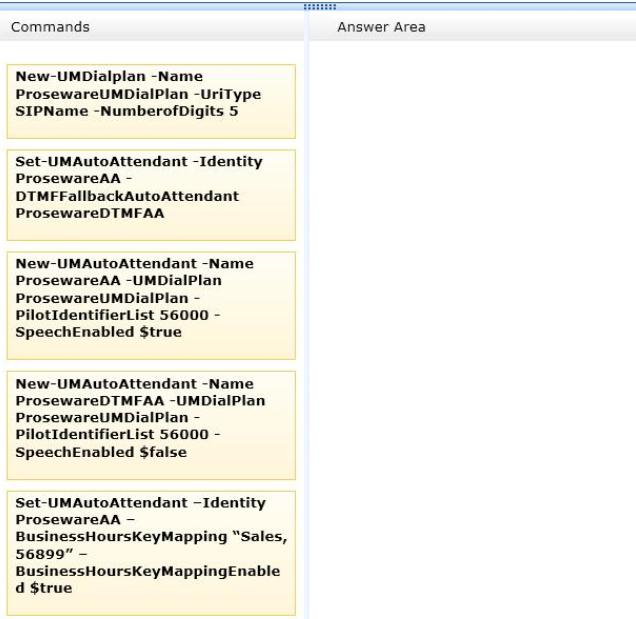 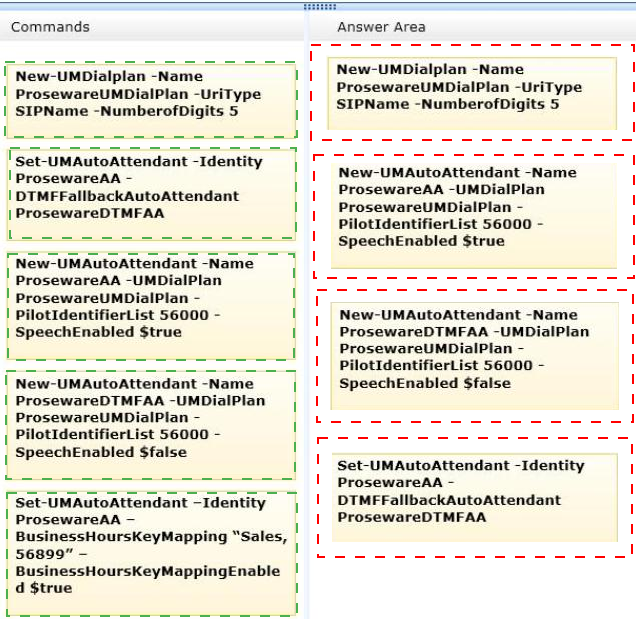 You need to recommend a solution to support the planned changes for the integration of the Exchange Server organizations of Contoso and Proseware.
What should you configure in each organization? (To answer, drag the appropriate objects to the correct forests. Each object may be used once, more than once, or not at all. You may need to drag the split bar between panes or scroll to view content.) 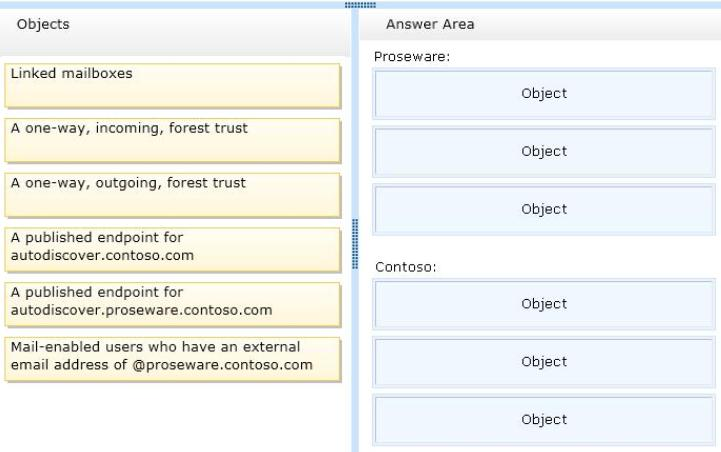 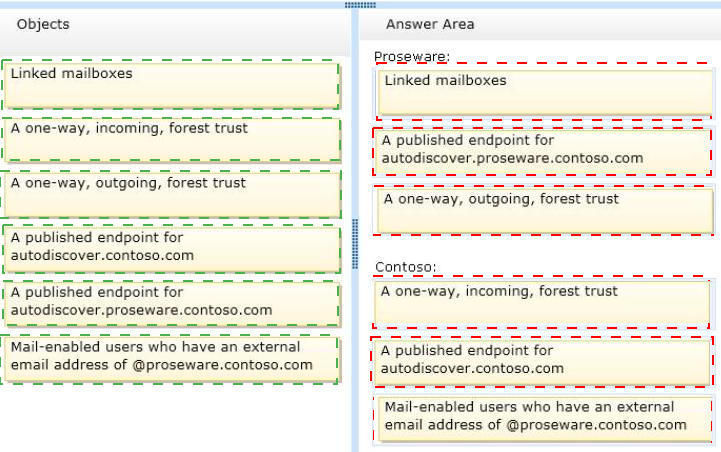 You need to recommend a solution to audit the issue of User1.
Which command should you recommend? (To answer, select the appropriate options in the answer area.)

Scenario: A user named User1 reports that email messages are being sent from her mailbox without her consent.
For mailboxes in your organization that you wish to enable audit logging on you can do so using the Set-Mailbox cmdlet.
* The AuditDelegate parameter specifies the operations to log for delegate users. Valid values include:
None Update Move MoveToDeletedItems SoftDelete HardDelete FolderBind SendAs

You need to recommend which technology can be used to meet each email security requirement.
What should you recommend? (To answer, select the appropriate technology for each requirement in the answer area.) 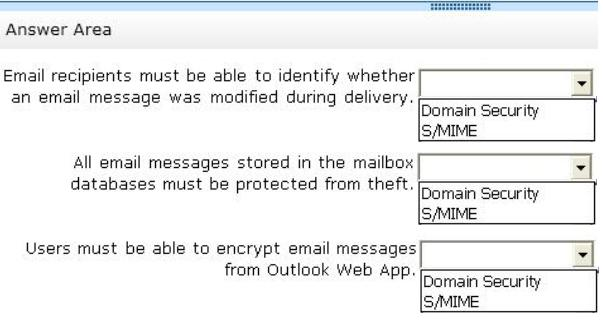